A Reddit user named, LinkBoyJT posted an image on imgur Tuesday, May 16, 2012 of his McDonald’s hash brown with what looks like a moth stuck to it.

He said on imgur, “I was eating a hash brown from McDonald’s on the way home when I felt something on the bottom…” 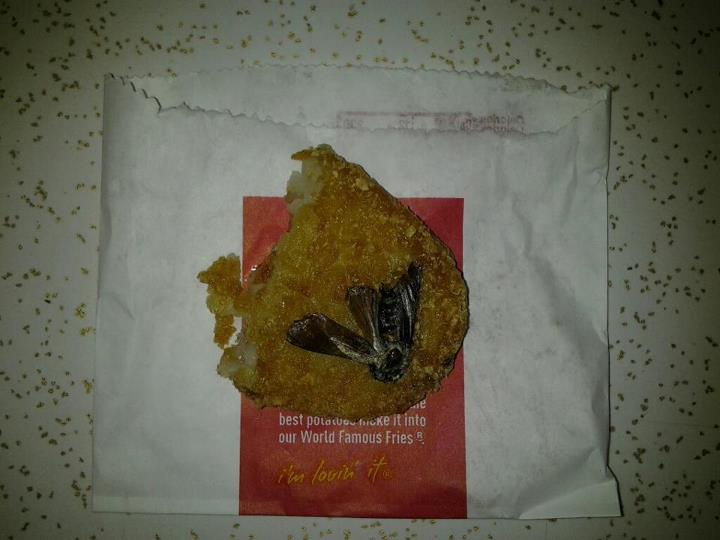 LinkBoyJT says he was driving home listening to music at around 5:45 AM on Tuesday, the sun wasn’t up yet. He felt something strange at the bottom of his hash brown wrapper, like a bump. He says, “I first thought it was purple lettuce until I turned the light on. I swear, I nearly dropped the thing when I saw what it was.”

He was lucky he started eating the opposite end of the hash brown and didn’t eat that part first. It wasn’t a bug that could have been brushed off and continue eating the hash brown. LinkBoyJT says, “It definitely looked like it was cooked with it. Maybe it was from their truck and froze with the hash brown?”

What did he do with the McDonalds hash brown besides loosing his appetite? He says, “I took the thing and showed it to the manager at McDonalds and she marked my receipt so I could get the same meal for free the next time I come in for breakfast. She didn’t really seem all that concerned.”

As of right now, the post on Reddit has 2,131 comments of people sharing their experiences of finding bugs in their food.

If that doesn’t surprise you, McDonalds has begun testing bugs as beef replacement. Although it’s still in the early stages, the ‘Bug Mac’ has been tested in some small cities throughout Europe.

Why might McDonald’s want to find a replacement for their beef? A spokesperson for the Dutch division of the company said, “By 2050 there will be nine billion people on the planet which puts enormous pressure on the already stressed agricultural lands we have. There simply are limits to our ability to grow and harvest food and as the population increases, with more mouths and less land, those pressures are only going to increase. This experiment, partnered with experts from Wageningen University, is a pioneering effort to change that tide and hopefully change the way we all think about food, while still retaining the taste people have loved for generations.”

Marcel Dicke head of entomology at Wageningen University in the central Netherlands says, “The question really should be: ‘Why do we NOT eat insects?”

The spokesperson continues, “We have found that acceptance is highest amongst younger people who are often more willing to try new things. The real issue is not in the food itself, but in the mind. People are used to bugs being something to be squashed not something to be eaten but we believe can gradually change that impression. There are 1200 edible insects on the planet and they are much less demanding to grow. This will result in abundant food supplies are far lower costs to the environment, something that will be essential to future survival. That aside, we feel that that this offers a great opportunity for our consumers. Insect components will further reduce the costs associated with food and provide the same level of nutrition and great taste, something I think we can all agree are good things.”

While it’s not clear if McDonald’s will intend to have the bug replacement meat worldwide, Scrape TV Business analyst Ken Green said, “From a pure environmental standpoint it makes perfect sense to do something like this, but let’s not forget that it also makes a lot of sense for the company’s bottom line. Bugs are much, much cheaper to harvest than cattle and that is no doubt a significant reason they are interested in this food source. That said, bugs are very edible and they have never really take off for a variety of reasons. However if any company can make that work its McDonald’s. Through some salt on a beetle and you have a Happy Meal. I can see Ronald McDonald dancing around with his giant termite and gnat friends. That above anything else will switch the world over to bug eating.”