A bar in St. Louis called Kilroy’s Sports Bar had a tent setup next to their location. The St. Louis Cardinals game had just finished with a great win to the Milwaukee Brewers. Hundreds of people were packed into the outdoor beer garden tent celebrating the win and having a night out on Saturday.

The incident is reported to have happened around 3:50pm on April 28th, 2012. Different reports say that anywhere from 100 to 120 people were injured in the tent collapse in St. Louis. The collapse started due to a major gust of wind from a storm that had an estimated wind gust of 60 to 80 miles per hour.

When the gust blew into the tent it lifted the tent up in the air and the metal poles from the tent went flying and hitting people. It started quite a commotion as metal chairs were being pushed and thrown throughout the tent.

NJ.com has some interviews with some of the patrons that give insight into how the collapsing tent at the Sports Bar took place. “I thought a train fell off the track,” said Art Randall, owner of Kilroy’s. “We all ducked for cover. Everything was going sideways. I had metal chairs ripping across the beer garden.” “People were pushing and shoving,” said Christy Eilermann, 42, of St. Louis. “The wind just picked up and they started dragging people inside.”

It has been reported that the man that died from tent being blown over by the wind in St. Louis likely died from cardiac arrest, a heart attack from all of the events taking place. The other injured were taking to the hospital which looks to be around 16 people that had serious injuries from tent incident and 5 were in critical condition.

The Huffington Post said that, “Kilroy’s owner Art Randall said things were flying through the air sideways and metal chairs were being flung across the beer garden by the storm.” There doesn’t seem to be any way that anyone could have prevented the severe weather problem that took out the tent but investigations are still underway.

KSDK has video of a tent collapse in St. Louis that killed 1

More photos from the incident: 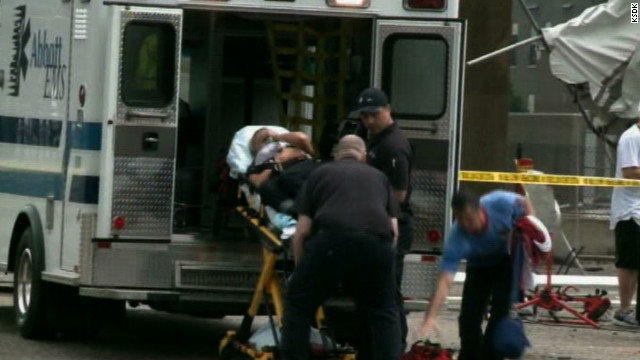