The International Space Station Astronauts have been snapping pictures from space. The one millionth photo was taken on March 7, 2012, but wasn’t released by NASA until March 27, 2012.

The one millionth picture taken from space was taken just west of the southern tip of South Island, New Zealand. The space station is 240 miles (386 kilometers) above the southeastern Tasman Sea.

Two Russian spacecraft are visible in the one million photo. You can also see a green aurora light in the middle right of the picture.

NASA officials wrote, “Illumination and the relative motion of features in the overall series of photos suggest that the view is towards the south to southeast with the approaching dawn to the left and a strong band of Aurora Australis, from left to right. A Russian Soyuz and a Russian Progress vehicle are seen center and right in the foreground, respectively.”

Who took the one millionth photo? Well, the space station has a six-man crew which includes three Russians, two Americans and one Dutchman. American astronaut Don Pettit says, “Not sure who took it, Dan Burbank or myself. We can’t remember.” Dan Burbank commands the station’s current Expedition 30 crew.

NASA’s one millionth photo was captured as part of a time-lapse photo session of Earth.

NASA officials said, “To date, space station astronauts have snapped enough photos to fill at least 319 single-layer DVDs, or 60 single-layer Blu-ray discs.” Who wouldn’t want to take a lot of pictures with great views like this. 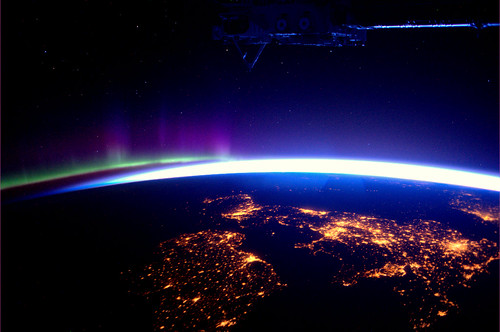